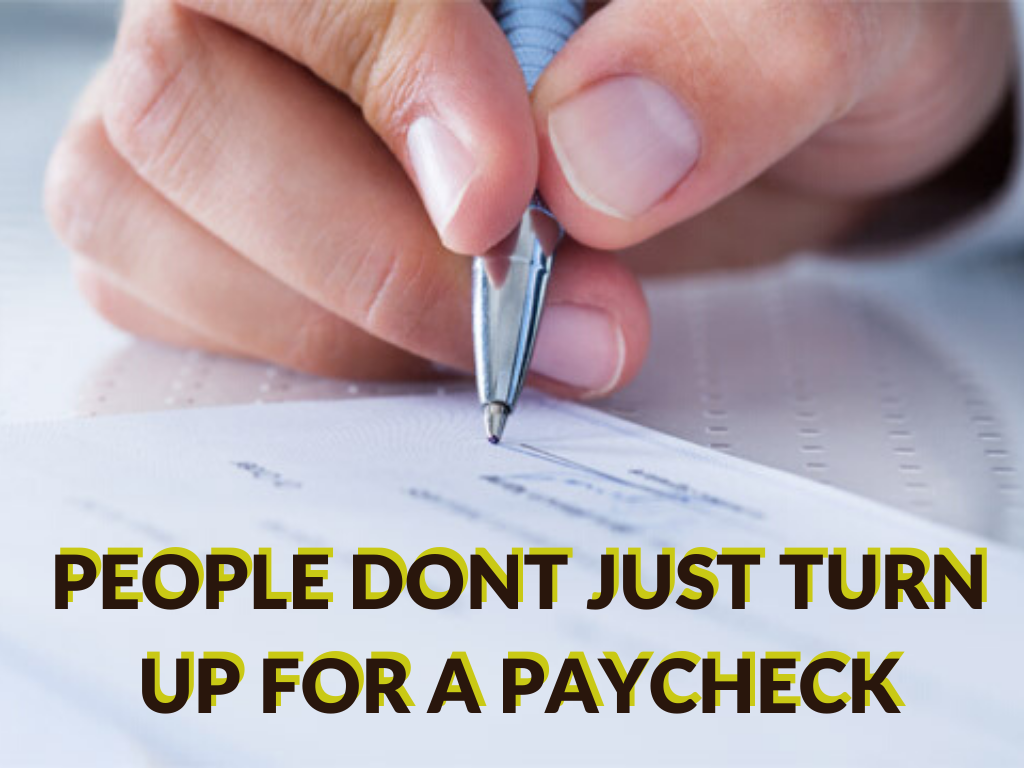 People don’t just show up for a pay cheque UNLESS we haven’t given them any other reason.


Everyone is motivated by something. But not everyone is ready to go out of their way to connect to their sources of motivation. As leaders, we need to take responsiblitiy for motivating people instead of just assuming people should be motivated. Let’s be honest, if everyone was an intrinsically motivated self-starter, then chances are one of them would have your job instead of you.

When we run workshops and keynotes around leadership and managing people for high performance, one of the simple exercises we do is to ask leaders to think about the things that motivate their people. One of the common observations we get is that some leaders think that the only thing people care about is money: “My staff only care about their paycheck,” is what we hear more regularly than we’d like.


Money is a Default In the Absence of Anything Else


What Should Motivate People?

Think about the things other than money that should motivate people: belonging to a team, contributing to a goal, doing great work…. There is an endless list. But most staff still default to money because, somewhere along the line, those other things weren’t placed on a high enough pedestal.

People may not absolutely love their job - I get it. But you know what every mentally healthy human on this planet loves? They love a feeling of achievement. They love the feeling of making progress. They love belonging to a great team and working towards something hand in hand with other people they care about.

This isn’t my opinion - it’s built into our physiology. Each of those situations gives us a little squirt of one of our reward chemicals. There’s no escaping that it feels good.

So, as leaders, we need to make these things important. People aren’t compelled to contribute to a great team if leaders haven’t set the foundations of a great team. People don’t get a feeling of satisfaction for achieving a team goal if leaders haven’t taken the time to be clear about those team goals, reward their progress and show staff how they contribute on a daily basis. If we don’t put time and effort into each of these attributes of teams and fulfilment, then they just don’t become appealing as motivators to our team members.

So if you’re reading this and thinking - my team just don’t care - then think again. It’s not that they just don’t are, it’s that you probably haven’t put enough effort into creating a reason for them to care.

** Tony Wilson is a Workplace Performance Expert focussed on helping leaders build the environment for high performance. His insights into performance science and it's application in the workplace will make you re-think the way that you approach leadership, culture change, high performance and productivity. Tony has an MBA and a BSc majoring in physiology and combines the two for a different perspective. He is also the author of Jack and the Team that Couldn't See and delivers workshops and keynote presentations around the globe.
comments powered by Disqus
Categories
Book Summary
3
Journal Support
3
Leadership
4
Performance
4
Productivity
2
Team Building
1
Travel Hacks
4