DO THESE FOUR THINGS TO BEAT PROCRASTINATION 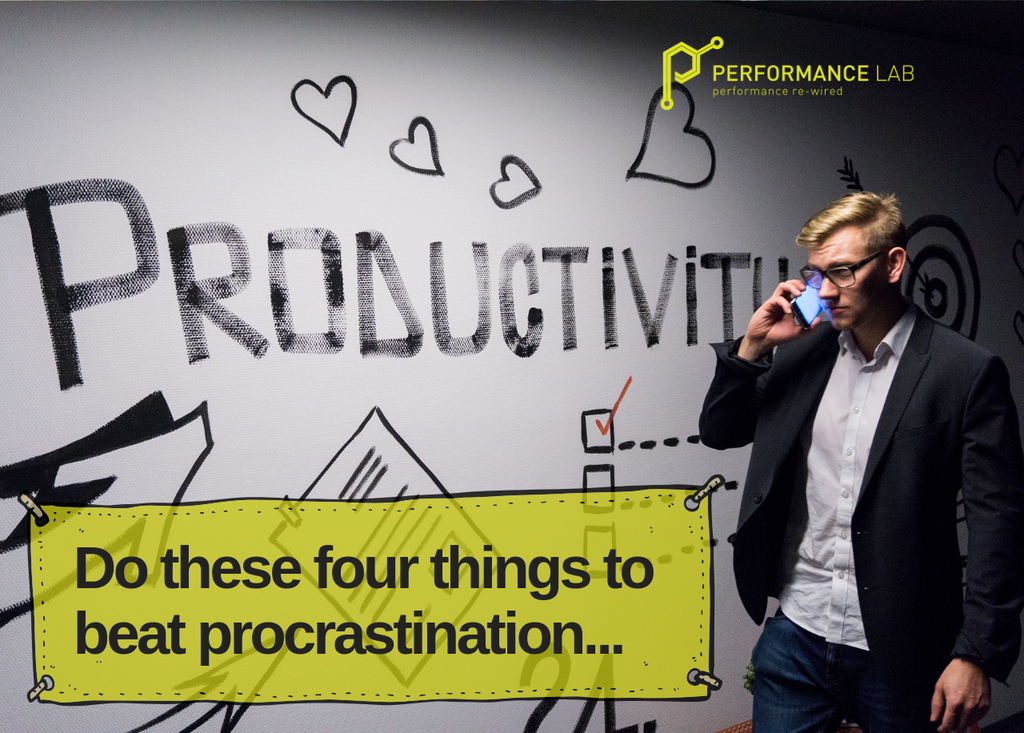 What’s going to stop you from achieving those big Goals you have? If you’re like most people – the answer is procrastination. And it is never helpful. Research shows that procrastinators end up with higher stress, more illness and lower grades at university. People procrastinate for many reasons. The main ones are that a) a task is too difficult or boring, so they make themselves feel good by doing things that give them an immediate reward, b) the task is too complex (like a project) so they aren’t clear where to start. Instead they decide to do something that is easier to understand or that has more clarity, or c) the reward or consequence of not doing the task is too far away – there is actually not enough stress to get them motivated.


To sum it up very simply, when we procrastinate, we are doing it because we would rather have something right now (comfort, clarity, or tick something off our to-do-list), instead of waiting for something in the future. We opt for a smaller, sooner reward, instead of doing something that will deliver a larger reward down the track.


Let’s say you should really get started on a project that’s due in four weeks’ time. But instead, you decide to check Facebook and answer some emails that aren’t particularly urgent. What just happened?


Now, you could have a bigger reward in the future; If you did some work on that project, then you may not get stressed-out down the track when the deadline comes around. Or you will probably do a better job because you won’t be so rushed, and this might lead to a promotion or at least making your life a lot easier.


But you didn’t do that. You took the smaller, sooner reward.


You opted for something that you could get right now. You got some social connection (Facebook) or maybe a sense of achievement (answered some emails…. tick!), or maybe you just got to do something easy, which made you feel comfortable. Either way you got a little reward right now.


But there are some simple ways to beat procrastination:


1. Connect with your ‘future self’ more clearly

Simply try to imagine yourself in the future, having NOT worked on the project and being under enormous pressure because of the deadline. Imagine your boss getting angry at you, or those sleepless nights. Then maybe also imagine how good you’ll feel if you actually do a great job, with a bunch of time to spare. Thinking of these consequences or rewards in the future will actually help drive up your levels ‘performance chemicals’ like dopamine and adrenalin. These are things you need to get motivated.

Long term things have almost no end in sight. To combat this, you can always break down this big, overwhelming tasks into smaller five-minute tasks. Even making one phone call, or creating one list, or writing the opening three sentences of an introduction can quickly help you gain momentum. It also creates a sense of achievement and if you can tick off one of two of those to-do-list items, then you actually feel like you’re making progress.

Set a timer for no more than 30 minutes. Ask yourself ‘what could I get done in the next 30 mins that will help me get closer to getting this project done. Pick some of those Tiny Tasks you wrote down above and if you just get started, you might find that you continue to work on it once you build get into the groove. The key is don’t get started on the simple task – get started on the harder task.

People usually reward themselves before they’ve actually completed anything. But they don’t even know it. They say “Oh, I’ll just go get a coffee and then I’ll get started.” Or they think “I’ll just read this article and then I’ll get going on that task.” But this is counterproductive because, in essence, it is just procrastinating even more! Once you’ve done your 30 minutes or your five Tiny Tasks, then give yourself a pat on the back. Go get that coffee, or watch that YouTube clip, or read that article that you were going to read in the first place. Rewarding yourself for being proactive is one of the greatest ways to reinforce the behaviour and it gives you something to look forward to.

Try these things to beat procrastination. They’re simple but they are very effective at tricking our hard-wiring.

** Tony Wilson is a Workplace Performance Expert focussed on helping leaders build the environment for high performance. His insights into performance science and it's application in the workplace will make you re-think the way that you approach leadership, culture change, high performance and productivity. Tony has an MBA and a BSc majoring in physiology and combines the two for a different perspective. He is also the author of Jack and the Team that Couldn't See and delivers workshops and keynote presentations around the globe.