TO BUILD RESILIENT, HIGH PERFORMING PEOPLE, WHAT SHOULD WE REWARD? 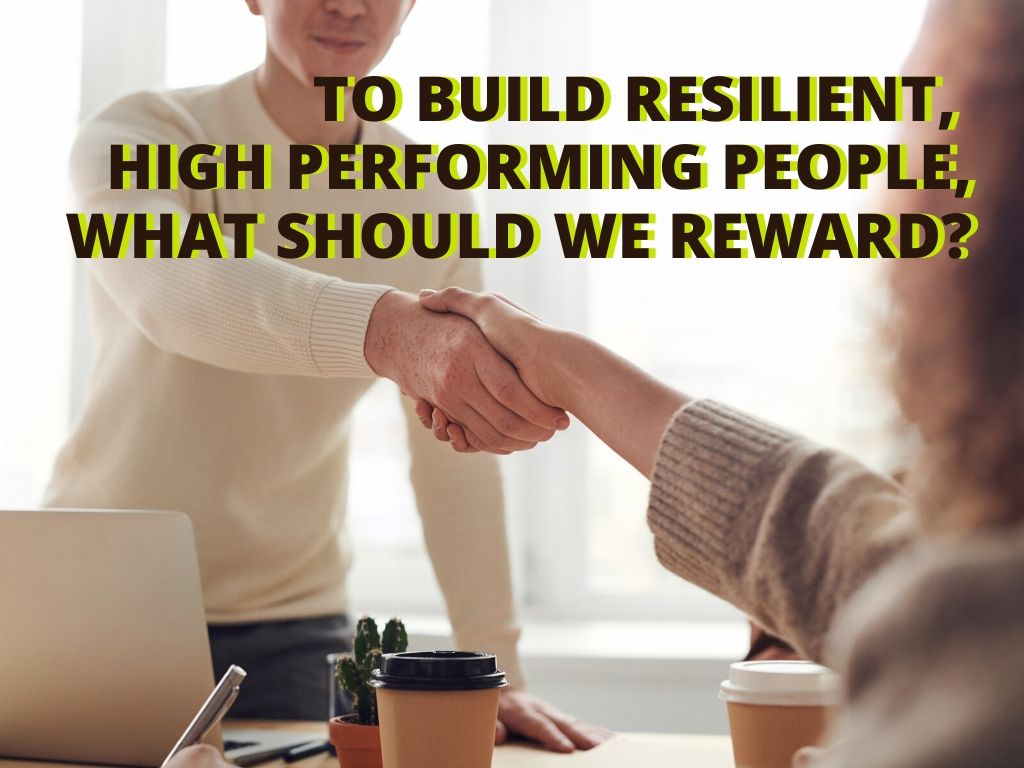 There is much written (and complained) about the current trend of rewarding ‘participation.’ Clichés like: ‘everyone gets a medal’ or ‘everyone’s a winner’ are recited and played out in school yards, classrooms and workplaces alike all over the globe. The pure high achiever will say that this shouldn’t happen. That everyone getting a medal ensures that people get rewarded for the lowest amount of effort and it doesn’t bode well for ‘real life’ situations where there are actually winners and losers. I agree. To a point.

So, let’s look at this from a performance standpoint, rather than just thinking about it emotionally. And also, let’s take into account some known effects that rewards have on behaviours, as well as the research about long term growth and performance.

Should We Reward Participation?

Should We Reward Winners?

This one is trickier than you think. If you want some short-term momentum and short-term outcomes, then go ahead and reward the people who ‘win.’ These might be the people who hit their sales targets, or the kid who wins the long jump on sports day. Most people have no problem with this, but we need to look beyond the outcome and find out what we are actually trying to reinforce through recognition.

Consider this: If someone sits at their desk all day, doing nothing but watching surfing clips on YouTube, but then – out of the blue – they get a random call from a single, unknown, customer who places an order that pushes them over their sales target – should they get the reward for hitting their that target? My view is that they shouldn’t. Why? Because we are not rewarding the right behaviours. This person learns nothing about winning business or closing sales, or worse, they learn that they get rewarded for doing nothing.

If people ‘win’ through no effort, but just because they happen to be better at something, or it is a complete fluke, then it tells the winners that they are just good without putting in any work (a dangerous thought pattern which will fail them at some point in their lives), and it tells those who didn’t ‘win’ that effort is worth nothing (which says ‘just give up’).

The same is true of the kid who wins the long jump on sports day – maybe he or she is just naturally bigger and stronger than every other kid. Should they get a reward for that? Not necessarily. The caveat being that you might want to reward the kid for winning so that they keep doing the sport and stay motivated.

But sooner or later, you’ll need to transition to a different reward system.

So, what should we reward?

We should reward effort if we want long term success. Some people will say that this is just rewarding people for ‘trying’ – and maybe it is. But the reality is that long term success comes from putting in the work. If I am your manager and you put in the effort to try to get sales – that is, you make the cold calls, see the clients, have the conversations that we know eventually lead to closing deals, then I am happy to reward you – even though you may not get the result this month, I know for certain the result is coming. Contrast this with the YouTube-watching slacker who gets the lucky call – I can guarantee that success is not certain for him in the coming months.

The ultimate reward is for people who put in the work. These people might actually win, or they might improve dramatically but not win, but either way we build persistence, work ethic and a growth mindset, which are the hallmarks of long-term winners.

** Tony Wilson is a Workplace Performance Expert focussed on helping leaders build the environment for high performance. His insights into performance science and it's application in the workplace will make you re-think the way that you approach leadership, culture change, high performance and productivity. Tony has an MBA and a BSc majoring in physiology and combines the two for a different perspective. He is also the author of Jack and the Team that Couldn't See and delivers workshops and keynote presentations around the globe.
comments powered by Disqus
Categories
Book Summary
3
Journal Support
3
Leadership
4
Performance
4
Productivity
2
Team Building
1
Travel Hacks
4